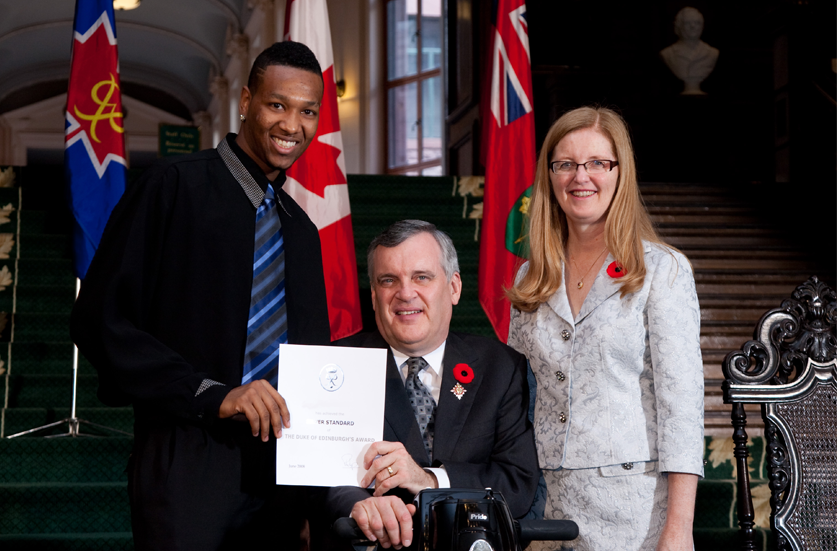 Statement on the passing of The Honourable David C. Onley

Stephen De-Wint, CEO of The Duke of Edinburgh’s International Award Canada has released the following statement on the passing of the Honourable David C. Onley, 28th Lieutenant Governor of Ontario (2007-2014):

It is with great sadness that my team and I have learned about the passing of The Honourable David C. Onley, former Lieutenant Governor of Ontario. On behalf of the Award in Canada and in particular our Ontario volunteers and staff, I would like to send our condolences to his wife Ruth Ann, to their children and extended families.

Mr Onley was a huge advocate for a number of causes, most notable of which was his support for disability rights and accessibility. He was also a huge advocate for the development and support of young people as they find their way in the world, each with their own struggles and barriers. He was an amazing supporter of The Duke of Edinburgh’s international Award in Ontario and across Canada. Jeff Needham, the most recent Executive Director for the Ontario Division, stated “He was a great supporter of the Award in Ontario and simply a very nice person”.

Jill Hermant, former Executive Director for the Award in Ontario for over 20 years stated that

“David Onley’s loyalty and commitment to the Crown, the Province and his Vice Regal position which he delivered with humility, humour and grace, was remarkable. As Chairman of the Award in Ontario, his interest in and commitment to The Duke of Edinburgh’s International Award was sincere and constant. His compassion and interest when speaking to young people was profound.  He presented Silver Awards to hundreds of Award participants during his tenure, all of whom will remember him with affection and great appreciation.”

He leaves behind a legacy that will continue to positively impact people across Ontario.